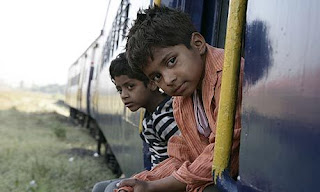 I want to begin this post with a quote from a book I am reading called ” No Longer A Slumdog” by K.P. Yohannan:

Our Father in heaven is greatly concerned about the welfare of these helpless children. In fact, God has special angels assigned to watch over them at all times. Let us look again at Matthew 18:10 (NASB): “See that you do not despise one of these little ones, for I say to you that their angels in heaven continually see the face of My Father who is in heaven”

Now this is something very significant that Jesus is telling us here. There are angels watching over each little child in the slums of Bombay (and Africa and everywhere else in the world), yet simultaneously, these angels are looking into the face of the Father who is sitting on the throne.

(Parentheses addition is mine)

The morning after I read this very chapter, I came across a story on my twitter feed that was posted on MSNBC here.

It is the story of a 12 year old little girl in Ethiopia who had been abducted from her family and village by 7 men in order that one of them may force her to marry him.

Apart from the appalling statistics that more than 70% of Ethiopian marriages are done this way, this was a child whose angel was looking into the face of God.

This was a child whom Jesus declared to all mankind, belonged to the Father.

That those who do them harm or prevent them from coming to Him…well it will be better if they had NEVER BEEN BORN.

There are certain things that Jesus was very serious and threatening about. The treatment of children by man was most definitely one of them.

As the story on MSNBC reports, the girl had been missing for a week with the kidnappers.

All hope seemed to have been lost, until police were patrolling on the outskirts of Bita Genet and found this young girl, beaten, crying, huddled up against a tree…and being guarded by three black-maned Ethiopian Lions.

As the police approached, the three lions simply trotted off into the wilderness, leaving the girl free to be rescued by the police where she shared with them about how the lions had come and scared off the men who had abducted and beaten her, and then stood guard around her for more than half a day.

The only answer a local wildlife expert could offer was, perhaps the lions had mistaken her crying for the whimpering of a lion cub. However this simply does not explain why they would then wait for the police to arrive and leave her to be taken to safety.

There is no doubt in my mind that this was the Lord’s hand at work in the rescuing of a child whom he holds most dear.

I cannot explain or comprehend why God chose to intervene in this situation and not the millions of other trafficked, kidnapped, and exploited children around the world.

But His ways are beyond our comprehension, and ultimately it is not God who is at fault for these atrocities, but the evil heart of man.

I know the Lord revealed these things to me in order for me to better understand, even more fully, the true purpose of our being here in Cancún. If we can save even one of the thousands of children who are abandoned to orphanages, trafficked or sold into slavery or the sex trade, then it will have been worth it.

If your support of us being here and your donations to our ministry contribute to allowing the little children of Cancún come to Jesus, then you have taken part in a great love story between our Father in Heaven and the 1 that was lost of the 99.

It is with a renewed sense of urgency and passion that I write this post to try to share with you this story that moved me so greatly.

The story of the omnipotent creator of all things, who was and is and always will be, greatness on such a scale we cannot begin to imagine with our feeble human minds, cared so greatly for one little african girl that he directed a pack of Lions to rescue her and protect her until help came.

I don’t need to go into the countless recorded analogies of God in the form of a Lion (Lion of Judah, etc…)

I don’t need to draw a diagram of how God used one of the most ferocious creatures he created to show compassion to this girl when the heart of man had none.

I don’t need to tell you these things for you to not be awed at the power and condemnation of this story on all of us who stand by in our comfortable lifestyles, worshipping at church once a week, and calling ourselves good people, while this kind of torture, slavery, and genocide goes on every day all around us.

I don’t need to tell you that we do help in some ways.

But I don’t need to tell you that we simply must do more. Not because of a political cause, but because our savior has commanded it of us.

I do need to tell you thank you for your partnership with us.

Together, we are seeking to do more.

Each and every day, right here in Cancún.