I almost feel guilty writing this update from a sunny 80°. Although, while Anna does not agree, I would certainly love to be in the middle of a blizzard! I can’t believe I am missing it!

Oh well, there are so many things happening here and I just wanted to bring you up to speed on what we are doing.

One of Back2Back’s main connections for ministry here is with the government. Specifically, the DIF, we call it the (deef). This is the institution for Family Development. It would be similar to the States if the Department of Family Services, WIC, Child Protective Services, and much of the welfare system were combined into one program. Needless to say, the need far outweighs whatever budget they are given.

Hoever through some miraculous connections, B2B has made contact with the majority of the leadership of the DIF offices here in Cancun and many of them are Christians and had been praying for help! They were thrilled when B2B offered to begin helping out. What we spent a lot of our time working on this past week was fixing up an older facility that is used to take reports from teenage girls who have been raped. In the past, there were four rooms, each with one desk and three counselors to take the account of these horrific stories from the girls. They would be telling their stories with 6-10 other people in the room right next to them. Many of these girls are victims of the sex trafficking trade.

So we were working on finishing up a construction project that began before we came as you will see from the picture. We have been building walls within each of the four rooms to separate offices so that each girl will have privacy with a counselor to begin the healing process. 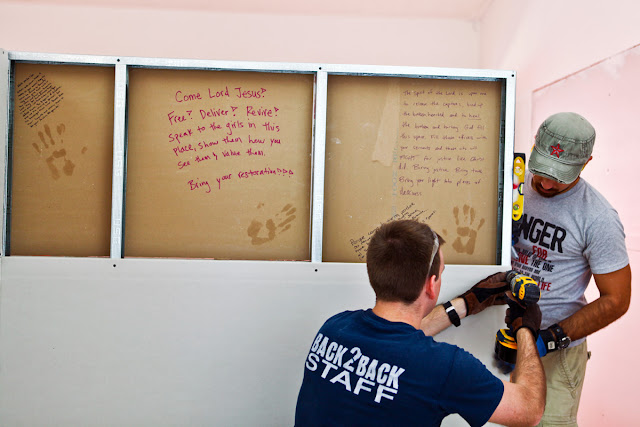 Mauricio and I hanging drywall

As you can see in the picture, the people who were working on the project before, wrote prayers and blessings on the inside of the drywall, and the handprints are where they laid hands on the walls and prayed. No one coming in or leaving this government facility will ever know, but the spirit of the Lord will dwell there and the enemy will have no grasp on anyone who passes by these walls! What an amazing idea!

Along with working on this facility, Mauricio and I also spent half a day assisting a local church do some demolition in their new facility that they are renting and moving into on February 1st. In speaking with Pastor Alfonso, I learned that they are taking an amazing step of faith by going ahead with this move for more space. They are moving to a new place that will give them 3 times more space and will cost half the amount of rent they are paying now, however they have no moving expenses and are six months behind on rent for their old location. Yet the Lord opened up this opportunity and in faith they are leaping and trusting that the Lord will supply the $140,000 MXP that they need to make it happen! Its inspiring really after seeing so many churches in the States being run simply like a business. It also reminded me much of our Indiana home church’s recent move to a much larger facility in order to grow and not knowing how the Lord would provide, only that He would. He has blessed the church greatly and will continue to do so, just as He always does when we trust in Him and His promises.

Lastly, Anna has set up a time to do her class on early childhood development for the soon to be teen mothers at DIF. She will be doing the class next Tuesday, January 18th. Please be in prayer for her and for the girls that she will be talking to. Pray that she will be able to share her testimony and how God’s love can help sustain them through the very tough days they have ahead of them.

So that was week one in a very brief recap. We also did get to the beach and got Kai into the ocean! 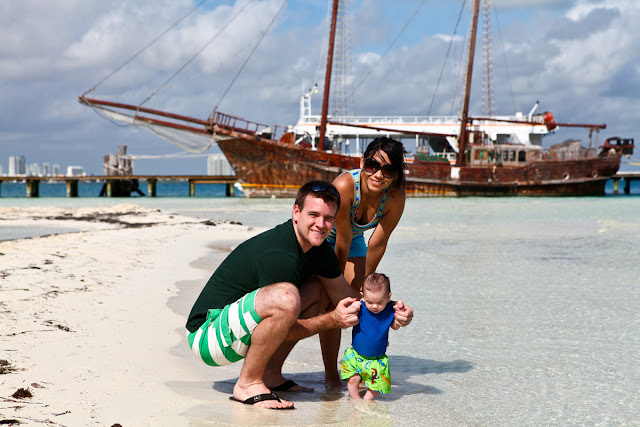